In our previous post we saw various ways to transform JSON arrays. However there will be a time when your JSON / XML file wont have Array and you need to Pivot JSON Data.

Here is a sample JSON file which we like to parse into rows and columns. Notice how it is using values inside in property name. This pattern needs Pivot option usage described later in this article.

If you like to play with real data then use below URL. This JSON has 60MB worth of data for all Products offered on AWS.  And It has similar structure as above except many more attributes under products node.

ZappySys offers powerful JSON and XML Connectors. Below section will describe how to Parse and Pivot JSON data or Pivot XML data. For demo purpose we will use JSON Source but steps are almost same for XML too.

So far we talked how to use SSIS to read your JSON data and Pivot it but what if you want to consume JSON / XML / REST API data in some other App without doing ETL via SSIS?  Thats where ZappySys ODBC PowerPack comes in picture. Its a collection of many drivers including JSON Driver and XML Driver.  You can also use Data Gateway Approach, which allows T-SQL code to fetch JSON / XML data directly into SQL Server Table without any ETL / Programming.

See below screenshot of JSON Driver Configuration to get idea.
Note: Use above query rather than what is displayed in the Screenshot. 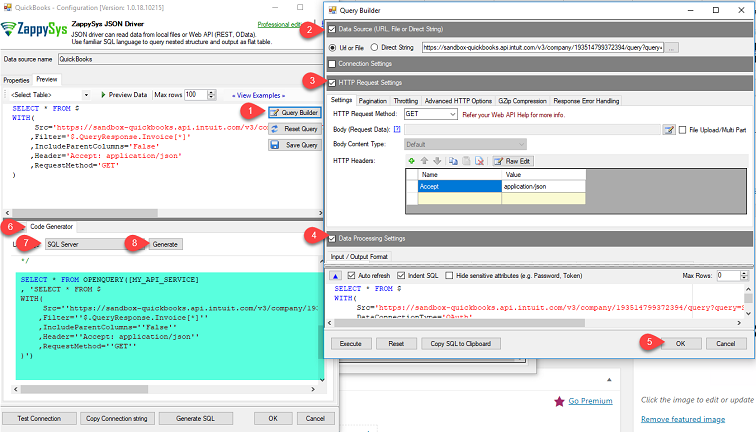 ZappySys ODBC Drivers built using ODBC standard which is widely adopted by industry for a long time. Which mean the majority of BI Tools / Database Engines / ETL Tools already there will support native / 3rd party ODBC Drivers. Below is the small list of most popular tools / programming languages our Drivers support. If your tool / programming language doesn't appear in the below list, which means we have not documented use case but as long as your tool supports ODBC Standard, our drivers should work fine.

In this particle we saw how to use some advanced options for XML/ JSON Source and ODBC Drivers. You can download respective product depending your usecase. For SSIS usecase Download SSIS PowerPack and for other ETL / Reporting app integration scenarios (i.e. Power BI, Informatica, SSRS , Excel, MS Access, SQL Server, JAVA, C# ….) Download ODBC PowerPack.