Export REST API to CSV is in some cases necessary to process the data because many tools can handle CSV files. In this new article, we will show different ways to export the data. The first example will do it using C#. The second example with use Python. Let’s take a look at these examples.

C# is a pretty popular programing language. In the first example, we will show how to display the REST API information to a CSV file named. Let’s take a look at the code:

Python is another really popular programming language. The popularity is growing a lot. In this example, we will learn how to Export REST API to CSV using Python.

So far we have seen DSN less connection string approach for ODBC Driver but now lets look at another way to use ODBC Driver in your C# or Python code. You can define many settings on DSN Datasource rather than setting in the ConnectionString. 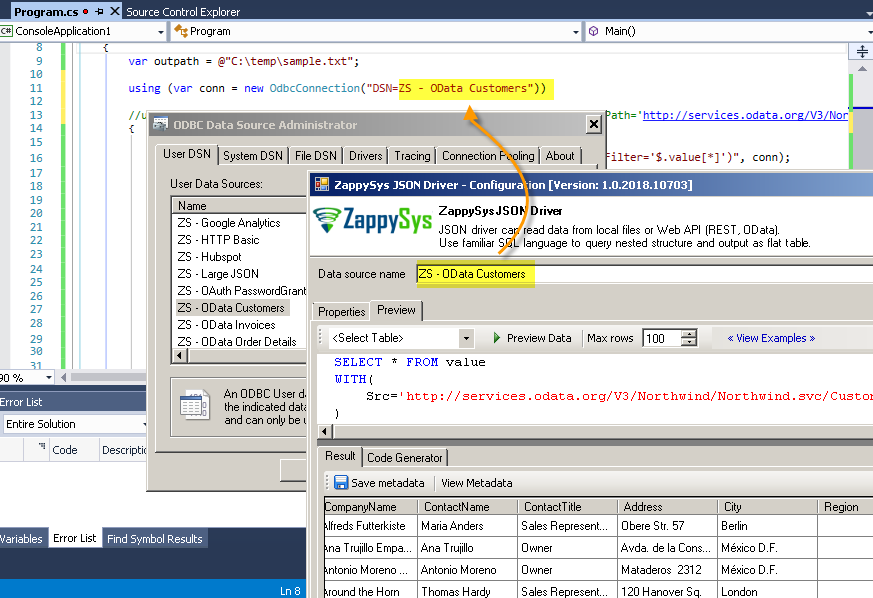 Reading from XML files or API can be done using the same way as previous sections except you have to use ZappySys XML Driver. Read help file here to see json query examples.

Reading from XML files or API can be done using the same way as previous sections except you have to use ZappySys XML Driver. Read help file here to see xml query examples.

To conclude, in this article, we show how to access REST API using C# and Python. We used the ZappySys ODBC PowerPack that allows accessing to REST API data and JSON files using SQL queries. It is possible to create simple SQL queries and access the data. It is also possible to access to XML files and Web API with this tool. If you liked this tool you can test the ZappySys ODBC PowerPack here.

Finally, if you want to read more about this topic, refer to these links: