UPDATE: ZappySys has released a brand new API Connector for ElasticSearch which makes it much simpler to Read/Write ElasticSearch Data in SSIS compared to the steps listed in this article. You can still use steps from this article but if you are new to API or want to avoid learning curve with API then use newer approach.

Please visit this page to see all Pre-Configured ready to use API connectors which you can use in SSIS API Source / SSIS API Destination OR API ODBC Driver (for non-SSIS Apps such as Excel, Power BI, Informatica).

Elasticsearch is a powerful engine that allows you to store, aggregate and, most importantly, search data in a very analytical way. In this tutorial, you will learn how to bulk load data from SQL Server to Elasticsearch with SSIS (part of SQL Server) and ZappySys PowerPack.

The scope of this article will be to show how to import records from SQL Server into Elasticsearch index as JSON documents using Elasticsearch Bulk API. In a nutshell, we will retrieve IDs and names of the products from a SQL table, transform each row into a JSON and lastly, index each JSON in Elasticsearch under record’s corresponding ID. This tutorial is going to be your stepping stone to use any Elasticsearch API as a destination.

We will be using these SSIS components of PowerPack to make things work:

NOTE: If your ElasticSearch instance is hosted as AWS Managed ElasticSearch Instance then select   <New ZS-OAUTH Connection>. rather than ZS-HTTP (Explained later in this article). When OAuth UI launches select AWS v4 Provider. For more information on calling REST API on AWS check this article.

In this section you will perform several basic steps to start the package: load data from SQL Server and prepare it for further steps. 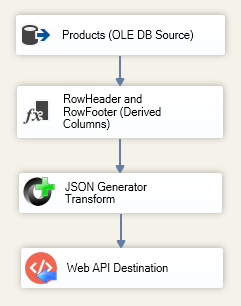 To add data into Elasticsearch firstly we need to prepare it with JSON Generator Transform. It will help us convert table rows into JSON documents.

From the above section “JSON String to Create Index data for the Bulk API call” follows all the steps From Step-1 to Step-8. 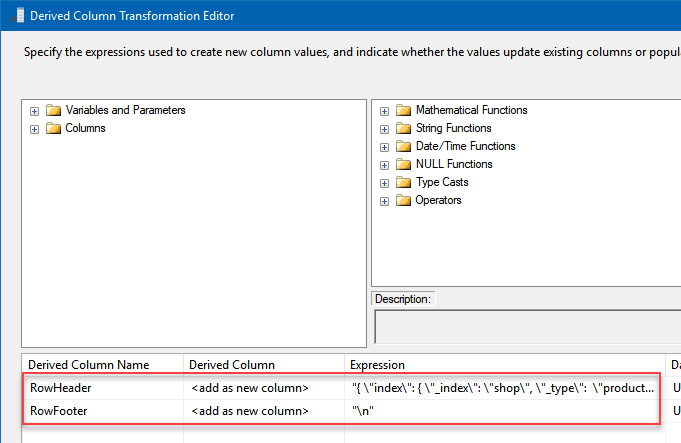 Derived Column configuration to add prefix and header and footer to a JSONIn the Expression column give them values:

NOTE: To learn how to make more complicated transforms visit these links:

From the above section “JSON String to Create Index data for the Bulk API call” follows steps Step-1 and Step-2.

NOTE: No need to use JSON Generator Transform (From Step-3).

Just for (2nd step) Step-2 use below expression for   RowHeader

In the Expression column give them values:

What if I want more? After upserting data use Web API Destination further

Overall you can use Web API Destination HTTP JSON response for other useful things as well, e.g. determine on how many replica shards record was indexed. JSON response will depend on which Elasticsearch API and which method you use.

If you want to delete the index by making Delete API call you can. Let’s make that call using the Rest API Task. Configure it like below screen and click on the Test Request button. 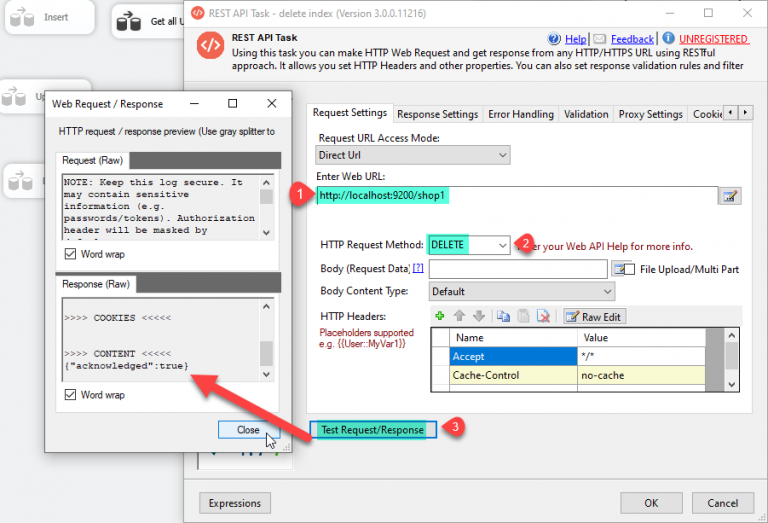 Incidentally, you may incorrectly construct JSON for Web API Destination body. Elasticsearch nodes may go offline or go out of memory. In any case you may want to know when that happens and take actions accordingly. For that purpose you have to redirect failed requests from Web API Destination to some other destination:

If your ElasticSearch instance is hosted as AWS Managed ElasticSearch Instance then select   <New ZS-OAUTH Connection>. rather than ZS-HTTP (Explained later in this article). When OAuth UI launches select AWS v4 Provider. For more information on calling REST API on AWS check this article. 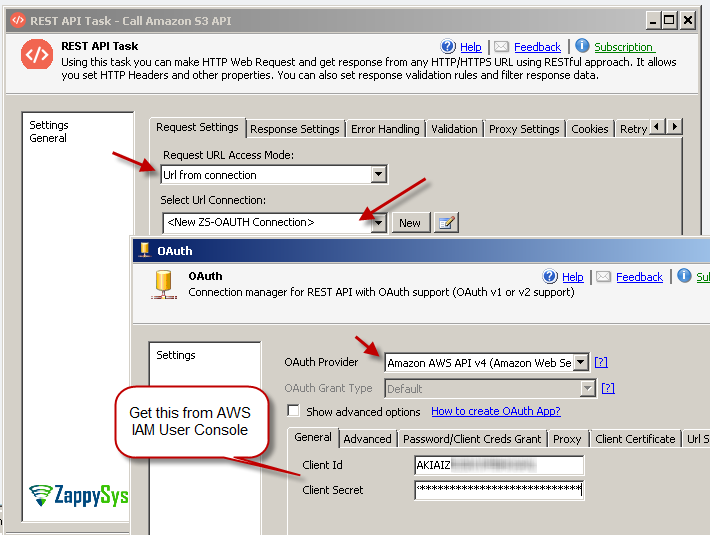 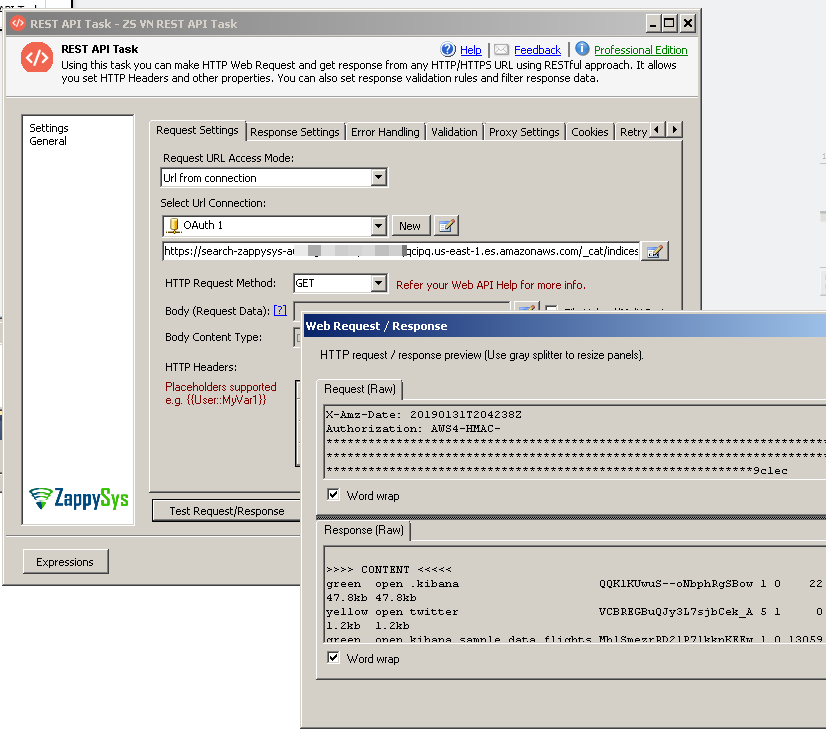 The most common error you may face when you run an SSIS package is truncation error. During the design time only 300 rows are scanned from a source (a file or a REST API call response) to detect datatypes but at runtime, it is likely you will retrieve far more records. So it is possible that you will get longer strings than initially expected. For detailed instructions on how to fix common metadata related errors read an article "How to handle SSIS errors (truncation, metadata issues)".

Another frequent error you may get is an authentication error, which happens when you deploy/copy a package to another machine and run it there. Check the paragraph below to see why it happens and how to solve this problem.

In SSIS package sensitive data such as tokens and passwords are by default encrypted by SSIS with your Windows account which you use to create a package. So SSIS will fail to decrypt tokens/passwords when you run it from another machine using another Windows account. To circumvent this when you are creating an SSIS package which uses authentication components (e.g. an OAuth Connection Manager or an HTTP Connection Manager with credentials, etc.), consider using parameters/variables to pass tokens/passwords. In this way, you won’t face authentication related errors when a package is deployed to a production server.

Check our article on how to configure packages with sensitive data on your production or development server.

Be sure to download a sample SQL Server 2008 SSIS package, in case you want to try it right away (you can upgrade it to a higher version).


NOTE: Once you open the package, you won’t be able to run it immediately, but don’t panic. Just configure OLE DB Source to point to your Northwind database and set URLs to point to your Elasticsearch instance.

In this article we have learned how to bulk load data from SQL Server and upsert it in Elasticsearch index. We used JSON Generator Transform to help us convert database table rows into JSON documents. In addition, Web API Destination was very helpful in automatically creating and making HTTP requests to Elasticsearch instance and indexing our data as a result. This tutorial was quite simple and straightforward, yet it is a good starter to use other Elasticsearch APIs and their features. From now on Elasticsearch reference is your best friend in learning what APIs exist, what are their methods and how HTTP requests should look like.