In this post we will learn how to fix some metadata / performance related issues in ODBC PowerPack Drivers using Caching / Metadata / Streaming Mode features. By default ZappySys API Drivers issues atleast two API request (First one to obtain Metadata and second, third… for Fetching Data Pages). Most of the times this should be OK and user wont even notice this unless you use tools like fiddler to see how many requests sent by driver. Sometimes its necessary to avoid extra requests to obtain metadata (For example you doing POST to create new record or API has strict Throttling). In this post we will learn various techniques how to avoid extra POST requests or how to speed up query by reading from Cache if your data doesn’t  change often.

How to Speedup Performance

ZappySys Drivers may provide following features (Some options may be available only for API drivers). These features can be used to speed up query performance and solve some metadata issues.

ZappySys drivers come with very useful Data Caching feature. This can be very useful feature to speedup performance in many cases.

If your data doesn’t change often and you need to issue same query multiple times then enabling data caching may speedup data retrieval significantly. By default ZappySys driver enables Caching for just Metadata (60 Seconds Expiration). So metadata for each query issued by ZappySys Driver is cached for 60 seconds (See below screenshot).

Here is how you can enable caching options. 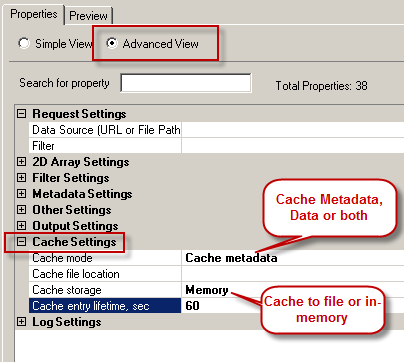 As we mention earlier in some cases you might be calling POST requests to Create new records. In such case API request must be sent exactly once. By default Driver sends first request to Get metadata and then sends second request to get data using same parameters used for metadata request. This is usually fine if we reading data and not creating new row on server… (e.g. create new Customer Row). If you have case where you must call API request precisely once then you have to use META clause in the WITH query to avoid Metadata request by supplying static metadata from File or Storage. We discussed this one usecase here.

See next 2-3 sections how to use META option in your SQL Query.

Now let’s talk about Metadata handling. Most ETL / Reporting tool need to know column type, size and precision before getting actual data from driver. If you are dealing with JSON / XML or CSV format you may realize that there is no metadata stored in file itself to describe columns / data types.

However metadata must be sent to most Reporting / ETL tool when they use ODBC Driver. ZappySys driver does intelligent scan from your local file or API response to guess datatypes for each column. In most cases driver does accurate guess but sometimes it’s necessary to adjust metadata (Specially Column Length) to avoid truncation related errors from your ETL /Reporting tool.

Issue with this automatic metadata scan is, it can be expensive (slow performance) or inaccurate (e.g. invalid datatype for some columns)

Let’s look at how to take complete control on your Metadata so you can avoid metadata related errors and speedup query performance.

Metadata file may look like below if you used previous sample URL. You can edit this metadata as per your need.

Version 1.4 introduced a new format for metadata. Here is an example. Each pair can be its own line or you can put all in one line. Whitespaces around any value / name is ignored. string type without length assume 2000 chars long string.

Now it’s time to use Metadata and speedup our queries. There are 3 ways you can use metadata in SQL query.

To use metadata which is saved to a file (like our previous screenshot) use below SQL query for example. Table name may be different in your case if you didn’t use previous example URL. You can Edit Metadata file as per your need in any text editor.

To use metadata which is saved to DSN Storage use below SQL query for example.

Save Metadata to DSN Storage

We mentioned briefly how to save metadata to DSN Storage but in case you missed see below screenshot. 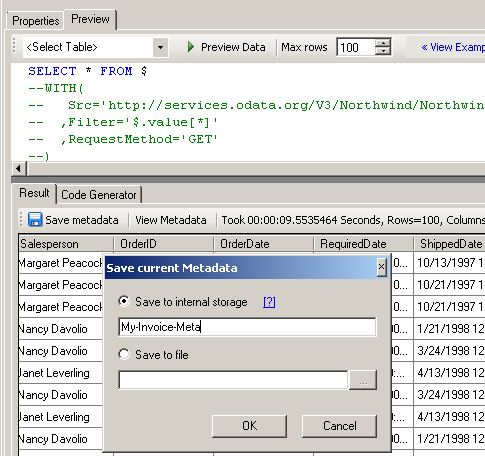 Save Metadata to DSN Storage

Once you save Metadata to DSN Storage, here is how you can view and edit. 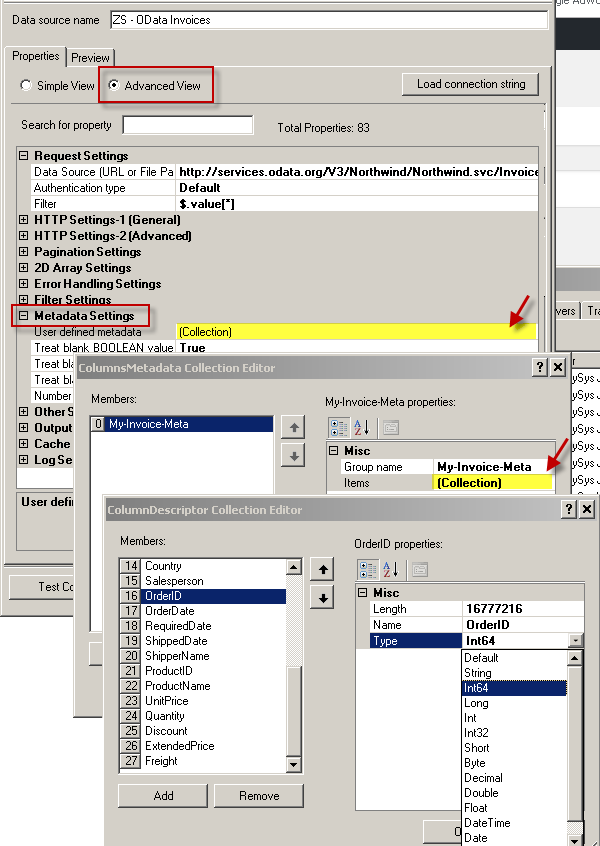 There will be a time when you need to read very large JSON / XML files from local disk or URL. ZappySys engine by default process everything in memory, which may work fine upto certain size but if you have file size larger than OS allowed memory internal limit then you have to tweak some settings.

First lets understand the problem. Try to create new blank DSN and run below query and watch your Memory Graph in Task Manager. You will see RAM graph spikes… and query takes around 10-15 seconds to return 10 rows.

Now let’s modify query little bit. Add –FAST, Turn off IncludeParentColumns and run again below modified query. You will notice it takes less than a second for same result.

Now let’s understand step-by-step what we did and why we did. By default if you’re reading JSON / XML data, entire Document is loaded into Memory for processing. This is fine for most cases but some API returns very large Document like below.

To read from above document without getting OutOfMemory exception change following settings. For similar problem in SSIS check this article. 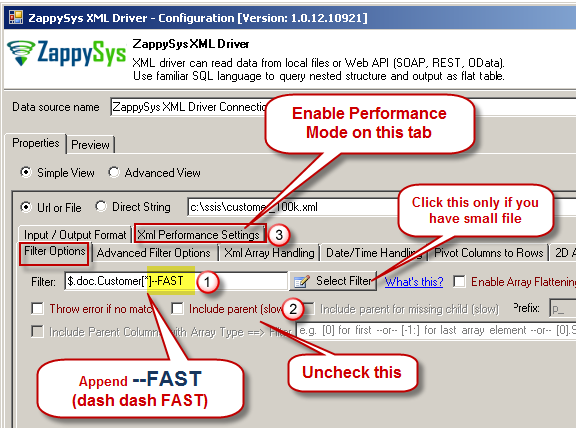 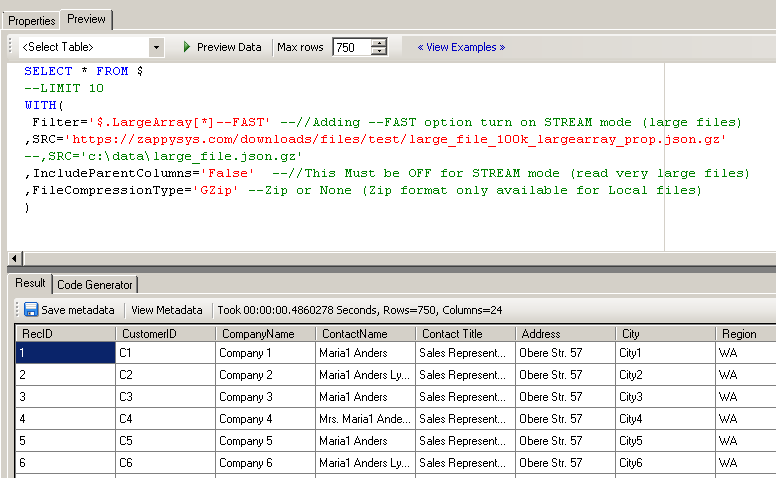 Table name must be $ in FROM clause, Filter must have –FAST suffix, Parent Columns must be excluded (IncludeParentColumns=false) as below.

Table name must be $ in FROM clause, Filter must have –FAST suffix, Parent Columns must be excluded (IncludeParentColumns=false) as below.

If you followed previous section, we mentioned that for Streaming mode you must set IncludeParentColumns=False. So what do you do in that case?

Well, you can use JOIN Query as below to support that scenario. You may notice how we extracting Branches for each record and passing to child Query query. Notice that rather than SRC we are using DATA in child query.