So let’s explore concepts of MongoDB Aggregation Pipeline and see some MongoDB query examples for SSIS use case.

SSIS MongoDB Source support all pipeline commands to write aggregation queries but its slighly different syntax than shell command so your SHell Query won’t work directly but you can copy some part of your Shell query. Check below Syntax.

So as you saw in above query various clause of SELECT queries are defined as pipeline stages. You can add any possible stages in different order. Based on their order it will be applied so order of stage is very important.  For more information about various pipeline stages click here. Below is high level translation of SQL Query to MongoDB Aggregation Query.

Now let’s look at few examples how to translate traditional SQL  Queries to JSON Query for SSIS MongoDB Source. We will use sample data we inserted in previous section.

Here is how it would look like (We used RoboMongo i.e. Robo 3T) but you can use mongo.exe command line to issue above commands. 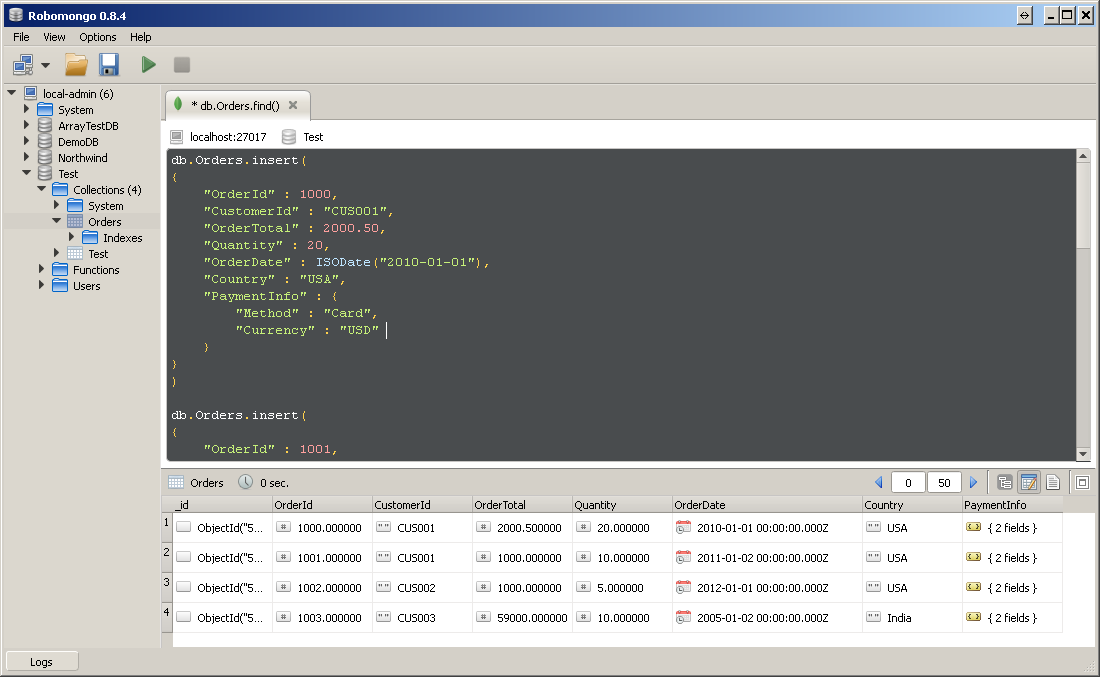 Here is how to write COUNT(*) query in MongoDB. Below query will find order count by country. Each query must output _id field and you can refer Document column using $ prefix (i.e. “$Country” or for nested object use dot separator “$PaymentInfo.Method” ) . To output _id column with different name we have used Country: “$_id”. Because we including copy of _id we can remove _id column by doing  _id: 0.  To include column in output use YourColumanName: 1 in $project stage.

Example 2 – MongoDB Aggregation Query with WHERE and ORDER BY- $match, $group, $project, $sort

Here is how to write COUNT(*) query in MongoDB. Below query will find order count by country.

Example 3 – MongoDB Aggregation Query with WHERE and HAVING Clause – $match, $group

Now lets look at an example of $unwind operator. $unwind can be used to perform operations on nested array. Common things would be flatten the hierarchy and then apply group by operation. Lets find out Average Quantity of Items By Order Number

There will be a time when you have to supply Dynamic Value from Variable or supply Dynamic Date time inside your query. Dates are little different than other data types. Check this article to learn more about passing dates in MongoDB Query.

To pass date from SSIS Variable you can use Format Specifiers. (e.g. yyyy-MM-dd  or for full ISO date yyyy-MM-ddTHH:mm:ssZ )

MongoDB is one of the most popular NoSQL / Document Storage Engine. SSIS PowerPack make super easy and efficient to read/write data in MongoDB without any coding effort. Download SSIS PowerPack to try out MongoDB features along with 70+ other components .